Elf on the freakin shelf! 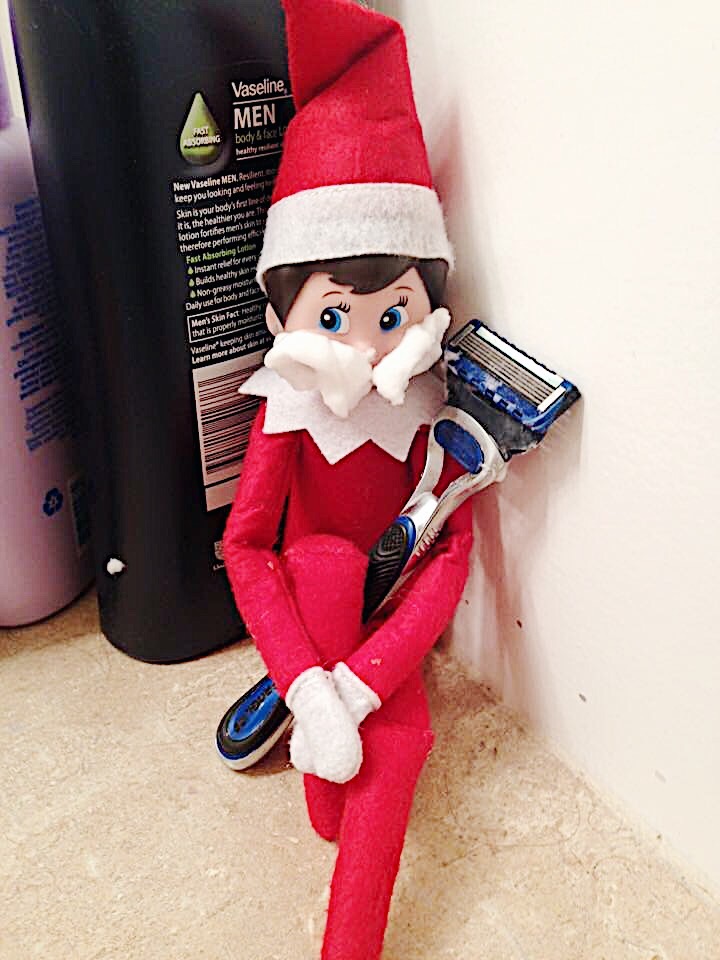 If you haven’t heard about the Elf on the Shelf, you must not have social media or be around young children and their parents. I first heard of the Elf on the shelf when Madison was 3 months old during her first Christmas. Of course I knew she did not need one that young, but couldn’t wait to get one but little did I know what I would be getting myself into. It seems that all of my Facebook friends that are parents all have a elf of their own, some people even have multiple. I mean seriously, how would I explain to Jeff that we need one Elf for each kid because when they are adults they’ll definitely want one from when they were little.

So what does this Elf do? He or She (yes their is girl elf’s too) are Santa’s helpers and they come to your house every year, ours comes the day after Thanksgiving. The elf watches the children and reports back to Santa every night, in which then you are supposed to move the elf so that when your kiddos wake up in the morning they get all excited trying to find the elf. There is also special rules that go along with the elf such as no kids can touch the elf or he will lose has magic power and not be able to fly back to Santa. On Christmas Eve the magic is supposed to be lifted for a small amount of time so that your kiddos can give a hug and say see you next year.

This all sounds fun right? Madison was 2 1/2 years old when our Elf first arrived… and I also thought this would be fun but little did I know, once you commit to having a Elf in your home, you are IN. You are IN for YEARS and YEARS of coming up with activity after activity for your elf to do. You will spend hours on Pinterest searching for ideas for what your Elf will be up to, some people even have their whole month of Elf activities planned out. I already have the task of wrapping gifts, baking cookies for Santa and then taking a bite out of said cookies, putting Santa prints through our house and being magical Santa and now I am supposed to put chocolate sauce all of the kitchen and laugh because the Elf did it… but then clean up the same mess that I made? Ya no.

The first year with our Elf, Elfy went great. I did so good that year. Check out some of our Elf’s adventures.

Fast forward to 2016, and our Elf arrived in the bathroom sink filled with marshmallows. The next night our Elf was found on the fireplace and that is where he stayed for the rest of the year. Our Elf last year was simply not feeling good and needed to rest.

This year Elfy has once again been super lazy. She is supposed to arrive on Black Friday, but we couldn’t the box so she was a day late. Since arriving she has only moved 3 times but then she fell off the curtain rod, broke her leg and is now out of commission…. I am quite sad about this as you can imagine. See the problem is, we are always forgetting to move her. And it should not be difficult. I am literally moving him from the top shelf in my kitchen to the bottom shelf and back again. But now with her broken leg… she needs to rest carefully… in the same spot.

I have seen and heard some moms talking about how they like to have their Elf make messes and do naughty things. So you have them do naughty things, make messes such as taking all the ornament off the tree or even bigger messes that afterwards you clean up…. I mean seriously? I barely have time to do all of the necessary things in my life to make all of these crazy messes so my child laughs at the elf, and then doesn’t care about it a few minutes later.

I see you though, Facebook and Instagram mamas. Don’t think I don’t, but I totally admire you. I see some moms that it seems like it is truly fun for them and I am practically hearing your kiddos laughing every morning. I have nothing but love for you all, but I simply cannot join you… and that is okay! Keep on keeping on mamas!

Styling made easy with FailFix dolls

How to Stay Organized with Alexa

33 Screen-Free Activities for your Family